Gothenburg, a smaller city in Sweden with big big foodie energy. The beautiful city included an archipelago where you can enjoy the quiet of the carless southern islands or roam the northern ones in the comfort of your vehicle.

Fun fact, Gothenburg almost didn’t make it onto our itinerary. We were debating being going to Gothenburg, Malmo, and Helsingborg or going straight to Stockholm from Copenhagen. I am overjoyed that we chose to go to Gothenburg. Turns out, Gothenburg is a foodie city (who knew?) which is right up my alley of course. The city is small, extremely walkable, and very charming.

We knew we would be arriving in Gothenburg on Midsummer, but we didn’t realize what that meant. We arrived in Gothenburg and checked into our hotel, where we learned some unfortunate news. As it was Midsummer, not many things were open because people were out celebrating. Unsure what to do, we asked the concierge for help. She kindly directed us to a Gothenburg foodie’s IG, but every restaurant we tried to reserve a table at, was closed or close to closing. We took a chance and decided to walk down, what we assume, the main road.

We noticed something interesting as we were walking down. Every other restaurant was Italian food or pretty lounges. Given we had just finished a three-hour train trip, we definitely were not looking our best. The sun was shining, even though it was probably close to 8 P.M., so we settled on a pretty patio. Olivia Avenyn saved us from some serious hunger pangs that night and remains one of the fondest parts of our trip.

The menu is large, but not overwhelming, which is a point in their favour. Under recommendation from the waitress, we ordered the Antipasto all’Italiana, which was essentially a tasting platter. We had caprese, parma ham, salami, parmigiano reggiano, artichoke salad, marinated peppers, olives, pesto, and focaccia. The focaccia and the caprese was probably my favourite part of this platter, but that might just be my personal bias talking (haha). Being able to mix and match what I was eating is such a fun experience, and I always advocate for the ordering of a tasting platter so that you can have a little bit of everything. This was honestly the best way to start off Gothenburg, tasting a little bit of everything and getting excited for what’s to come.

We ordered two pizzas, the Arlecchino and the Mozzarella di burrata. The Arlecchino pizza was a white pizza, which means no tomato sauce. On this pizza was mozzarella, pecorino, chicken, chili paste, arugula, and lemon. If you’ve been around this blog long enough, you’ll of course know that I’m no good when it comes to spicy things. But this pizza was intriguing enough (or I was relaxed enough) to just go for it. The crust was what we would term artisan, but never having been to Italy, I can’t compare it, so I’m hesitating to call it artisan. Anyway, the crust was a good mix of tender and crispy, and I didn’t keel over and die because of the chili paste. Adding lemon to a pizza is a first for me though, especially with this combination of toppings.

The Mozzarella di burrata is exactly as it sounds. Tomatoes, mozzarella, mozzarella di burrata, cherry tomatoes, and arugula. One of my greatest weaknesses was presented to me, burrata, how could I say no? It tastes exactly as it sounds, full of tomatoey and cheesy goodness, but oh so very fresh. I think fondly back to my inability to stop eating both pizzas. I think I could’ve spent all night nomming.

Partway through the meal, we fell into the trap of being too intrigued by certain menu items, which is why we ended up with a plate of Tozzetti di polenta. Fried polenta with aioli, rosemary, and sea salt. These were little gems of fried goodness, light as air but lasting on the tastebuds. I could’ve easily eaten ten plates of this and not notice at all.

We decided to go check out the islands and spent a large portion of the day sunning (me) swimming (her) on the island of Branno. Highly recommend checking out the islands if you decide to go to Gothenburg, beautiful and quiet, what more can I ask for? We got back late (darn midnight sun and our lack of ability to keep time) so we consulted the IG and decided to check out Tyska Bron.

Here’s the thing. This beautiful restaurant has no address. Google’s only entry for it just said Bridge in Gothenburg, so Bridge in Gothenburg it is. We were momentarily confused as well (mostly over the bathroom situation), but gamely descended the steps to the restaurant. The IG had this restaurant listed under wine bar, so we obviously chose it for the novelty of it being on a bridge. Wow were we pleasantly surprised.

Their drinks menu was of course good, but we weren’t after that, we were after dinner. Being as they were a wine bar, we weren’t expecting a robust menu, but the selections they did have was right up our alley. I ordered the Char, which was a baked char, with Sandefjords sauce (Norwegian Butter Sauce), horseradish, radish, spring onions, green beans, and deep friend crushed potatoes. No lie, I still dream about this dish. The Char very literally melted in my mouth. Other than my distaste for spring onions, this dish was perfect, for me at the very least. The butter sauce was amazing, and I remain sad that it isn’t socially acceptable to lick the plate in public.

We also got to enjoy, what we’re told, a typical Midsummer meal.  It included two kinds of herring, shrimp, cheese, potatoes, and crackers. Unfortunately for me, my crustacean allergy reared its ugly head and prevented me from trying a lot of this dish. The shrimp mixture and one of the herring options was also mixed with shrimp. But the cheese, potatoes, herring, and cracker was delicious. The herring becomes more of a spread and went great with the boiled potatoes. The cracker was crisp, as in the sound and the texture. I’ve very obviously never had this type of cracker before, so yay for a new experience.

Haga, one of the oldest parts of Gothenburg, is a must visit. There are tons of charming shops (including this really awesome wool place with awesome stories) and cafes.

We stopped in the middle of discovering this picturesque part of Gothenburg to discover, possibly, the largest cinnamon bun I’ve ever seen. My friend and I totally thought that we would somehow, somehow, be able to find a cardamom bun, so we went with this giant cinnamon bun instead. Regrets were had, as we never did end up finding one, but I digress!

I’m not going to say that this was the most delicious cinnamon bun I’ve ever had, but I do recommend visiting Café Husaren. The inside is very picturesque and just looking out, or even sitting outside, and watching Haga happen is a fun experience.

For our last meal in Gothenburg, we decided to recreate our first night and wander till we found something interesting. Just off the main stretch that we wandered down on our first night, was this bistro, sitting innocently on a corner. As usual, we were completely thrown by the sun and didn’t realize how late it already was and was mildly worried we were too late to eat. Thankfully, we made it before the kitchen closed (go us!).

We shared a charcuterie board, and I got the pappardelle. The charcuterie changes at regular intervals so they’ll introduce it to you daily. When we were there, we got the cheese based one and got to try three different cheeses with crackers. I, unfortunately, forgot to write/note down what the three cheese were, so at this point, your guess is as good as mine. I just remember really enjoying this plate.

The pappardelle dish, though, was delicious. Inside the pappardelle was beef filet, truffle, mushroom, onion, tomato ad trufflepecorino. Truffles are a hard one, the taste of them is so strong that they often cover up most other flavours. Striking a balance is a talent and I think Humm has that balance. I love flat noodles, so pappardelle is right up my alley. Honestly not sure what else I can say to make this dish any more intriguing, but just take my word for it that I wish I had a tub of this. But then I’d probably be unable to roll out the door, so never mind?

With this, my Gothenburg foodie adventure ended. We only allocated three days, and wow I wish I had a week here, so much to eat and so much to see. When people say Gothenburg only needs three to four days, I say that’s not enough. I like to move pretty slowly when I’m on vacation (maybe that’s why), take in the sights and inhale all the foods. So, Gothenburg, I’ll be back, mark my words. 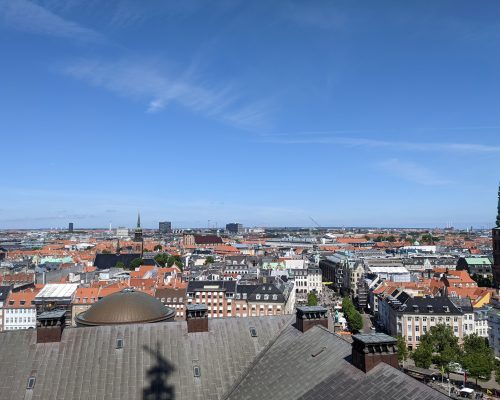 Copenhagen, capital of Denmark, home to the Little Mermaid Statue, hygge, and licorice (thought I’d say the danishes didn’t you.) was my latest adventure. I got to discover the city and do some eating along the way, what an ideal vacation.

🍎 I went apple picking with some friends over t

It's been a busy busy week! We've been too tired t

Guess what I did for three weeks this summer?! I t

Curiosity is taking some time off! See you guys so

IT'S OUR 10th ANNIVERSARY! How fast does time pas