Copenhagen, capital of Denmark, home to the Little Mermaid Statue, hygge, and licorice (thought I’d say the danishes didn’t you.) was my latest adventure. I got to discover the city and do some eating along the way, what an ideal vacation.

Fun fact, I have a friend who did a semester in Copenhagen, so when I floated the idea of doing a trip around Nordic countries, she jumped onboard, feet first. I was super excited to go on this trip with my friend (sorry NSSSO) and to go on a food adventure.

We arrived in Copenhagen jetlagged and hungry (which seemed par for the course), so we went ahead to discover the neighbourhood we were staying in. After a false start (in which we discovered things close pretty early in Copenhagen) we finally ended up at our first restaurant.

Thus, began my food adventure. Now, I’m not usually a drinker, but my friend is an avid fan of drinking. I had somehow gotten into the mindset of being on vacation and apparently let my inhibitions go and (to my own astonishment) drank pretty much every day on this trip.

At Bang & Jensen, I had my first ever Dark & Stormy (dark rum, ginger beer, lime, and Angostura) and finding myself enjoying it more than I thought. This is a surprise to me as I don’t like rum. Rum is really not my drink, but this Dark & Stormy may have convinced me to give it another try. I liked the spiciness of the ginger beer and surprised myself by how fast I finished it. Definitely would try again.

For the actual food portion of this meal, I ordered a Grilled Chicken Thigh. This came with a side of couscous and raw tomatoes tossed in fresh coriander, served with a mint dressing.

Coriander (or cilantro) and I have a negative relationship, aka, it makes me gag and throw up. Unfortunately, I had forgotten that coriander and cilantro were the same species of plant, so when I took a bite of the tomatoes, I had a very emotional tastebud shattering moment. That meant that my friend ate all of them, and, according to her, they were delicious.

The grilled chicken thigh was really good. It was tender and grilled wonderfully. I’m always a little hesitant when I eat chicken at restaurants, dryness always keeps me from ordering chicken. But I figured, hey chicken thigh, can’t really go wrong with that. Now, I don’t know whether it’s because it was my first meal in Copenhagen or whatever not, but I thought everything was done super well. The couscous (with it’s potential to go soggy) was lovely and the mint dressing accompanied everything really well. I’m only sad I couldn’t have the tomatoes.

Our hotel came with breakfast (yay friend and her eagle eye when it came to finding a hotel), so we got to enjoy that for several days. I find myself quite fond of a good Nordic breakfast, bread, cheese, cold cuts, maybe some fruit. Seems pretty good and efficient to me. Also, super honestly, their butter has to be the best butter I’ve had, hands down, no questions asked.

Anyway, moving on. Lunch on our first official day in Copenhagen was at Aamanns.

We ended up getting takeaway because, wow the weather was gorgeous. When in Scandinavia, try a Smörgåsbord. We each picked out three sandwiches and made our way to picnic by a lake (doesn’t that sound positively dreamy?).

Let me just tell you, my opinion of this lunch might be directly influenced by just how beautiful my lunch setting was. But here goes nothing.

All the sandwiches were very fresh and open-faced. The takeaway packages were super adorable, I didn’t really capture its essence well enough in the pictures, but I hope you get a good idea.

Let’s start with the one I didn’t 100% love, the Grilled Sirloin. There was nothing wrong with it honestly, I just didn’t love it as much as I loved the other two. I found the steak a little bit hard to eat without having a proper table, so that might just be where it affected my perception.

I have come to discover I’m not a huge fan of lingonberries, but that didn’t detract from how good the Cold Smoked Icelandic Salmon. Kohlrabi is also a new discovery of mine and the crispness of all the veg with the smoked salmon was excellent.

We’ve come to my favourite, the Mushroom and Lentils Pate. It doesn’t sound amazing, especially those of us who are not inclined towards vegetarian food, but it was so good. I honestly wasn’t sure what I had got myself into when I opened the box, two containers, assembly required? But once I put the sandwich together, I was like this is it. The mushrooms on its own is quite salty, but the sweetness of the beets cut right through it and everything else was just the cherry on top of a delicious sandwich honestly.

On this day, my friend brought me to an old university haunt of hers. She confidently claimed that I’d fall in love with it, and it was exactly what I love in life. I was just excited to check out one of her favourite places in Copenhagen honestly. Wow she was right though.

A bookstore café? Sign me up and leave me there, I don’t need to be anywhere else. I have several passions in life: books, food, and lazing. How could this place not be the place of my dreams? Surrounded by old texts while being able to eat? Absolutely a dream come true.

I ordered a hot chocolate and a caramel cheesecake. I’m not about to wax poetic about how delicious they were. Honestly, the hot chocolate was good, and the cheesecake wasn’t overly sweet. This is a pleasant surprise, since you never know with a caramel cheesecake. But it wouldn’t be my main draw. They also have a pretty full menu, but we didn’t get a chance to try it since we went in the afternoon, so if you wanted to give it a try, I’d say that have a pretty good selection to choose from.

I could’ve easily spent the rest of the day there, pick up a book (hope that it’s in English), drink hot chocolate, and eat cake all day. Highly recommend visiting this place, just for the atmosphere.

Often, the best adventures are the ones you stumble on. This next restaurant is exactly that. My friend really wanted to check out Superkilen, which is a public park designed to promote the diversity in the area. Once we were done wandering the park, we began looking for food. We struggled for a bit, Google wasn’t super helpful, so we kind of arbitrarily picked a restaurant on the map and went for it.

This is a little restaurant that I now suspect mostly does takeout and delivery, they were startled that we wanted to sit down. The space they occupied clearly used to be an office space and was not equipped to be a restaurant. We were led into what looked like it used to be a conference room of some sort. All the tables and chairs were office tables and chairs, so that was surreal.

But the food, omg the food. I, being the genius that I am, forgot to take a picture of the menu so I can’t even tell you what we ordered. Just know that it was delicious. The bread was amazing and so very soft. I believe I got lamb and my friend got beef, but honestly can’t remember clearly enough (bad me).

According to the sign outside (and with a helping hand from Google Translate), we had some excellent Somali food that night.

To round off our adventure, we decided to go to a cider bar near our hotel.

This little cider bar is conveniently underground, which means there’s a chance of walking by it. But once you walk down the stairs, you are greeted by shelves of cider. The staff was super nice and let us do a tasting of several different ciders until we found one we liked.

(They also explained a completely bizarre high school graduation ritual to us, since we were lucky enough to visit Copenhagen during that time. High school graduates, who are going off to university, get a hat with their name embroidered onto the back of it. Then they proceed to party and run rampant across the city; blowing whistles, renting out party buses, military vehicles (to turn into party buses), and drink. It was a very loud week when we were in Copenhagen, and this lasts for a month (depending). Wild).

It’s not a very large place, but it still felt a bit like a rabbit warren, with a little path to the other room. I cannot emphasize this enough, things close early in Copenhagen. So when we got there for, maybe, 9:00 P.M., there was already almost no one there and we had the other room to ourselves for the remainder of the night.

We were also given some ‘dessert’ cider to taste as well. Lucky us.

I’d suggest a visit, the staff(?)/proprietors(?) (status unclear) is super nice and we struck up a conversation about why we were traveling and found out that he traveled to Copenhagen during the pandemic and essentially moved there to be with his girlfriend. By passing how sweet that story was, he also cycled from the UK to Denmark, so kudos to him, seriously.

Last meal in Copenhagen, and we went for Korean food. I had a bout of stomachache on our last day in Copenhagen (darn stomach), so I wanted something a bit more familiar. The closest we could get to that was Korean food, so off we went.

Disclaimer: I had my first soju ever in Copenhagen. Should I have had that after having stomach issues? Probably not. But I did it anyway and survived, so yay (?).

I’m going to begin this by saying I can’t compare it to the Korean food at home, so I will do my best not to. The atmosphere of the place is really cool, and they really pushed KPOP to the forefront of the restaurant, given it was all they played. I’m not complaining, as I said before, I found it really cool.

My friend and I both agreed that it wasn’t the same as the Korean food in Toronto, but still pretty good. I was a little disappointed by the buns though, mostly because the bottom bun lost structural integrity pretty quickly, so that was kind of unfortunate.

We laughed when we realized that we had ordered two rice dishes, guaranteed to be full that night for sure. My preference went to the Bimbimbap, but that’s just because I like my food piping hot. Overall, both dishes were good and I’m totally open to trying everything else on the menu.

My friend remained impressed that a Korean restaurant finally opened in Copenhagen.

Thus ended my trip to Copenhagen, stay tuned for all the things I ate in Sweden! 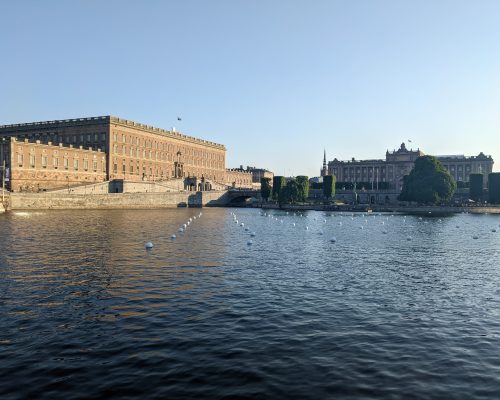 Stockholm, a capital city spread across multiple islands. This is where we finally found some Swedish meatballs, attended the opening of an Ikea and where I fell in love with a modern city hidden inside an ancient one. Stockholm, where to begin? […] 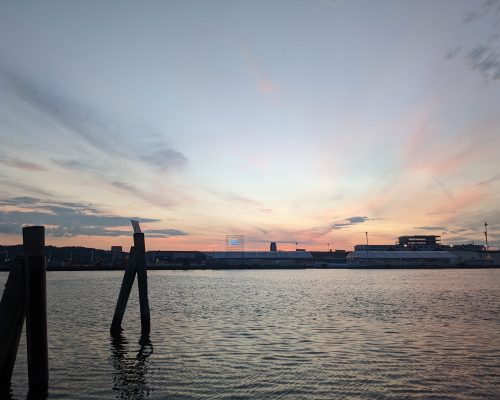 Gothenburg, a smaller city in Sweden with big big foodie energy. The beautiful city included an archipelago where you can enjoy the quiet of the carless southern islands or roam the northern ones in the comfort of your vehicle. Fun fact, Gothenburg […]